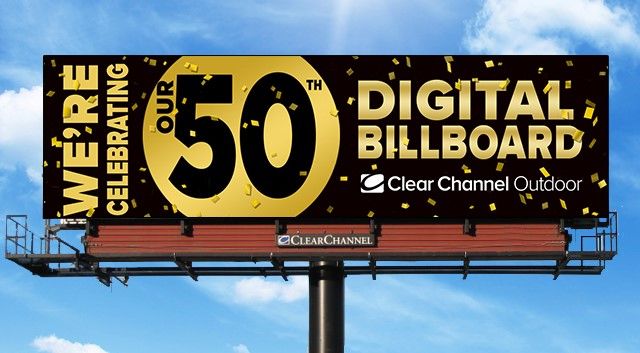 While talking with a friend in the digital signage industry recently, we joked that people will put a screen anywhere if they believe it’s an opportunity to advertise to a captive audience. Sides of buildings, sides of buses, at the gas pump, in the back of taxis, in elevators, on the freezer case at your local supermarket… above the urinal!

If it was possible and legal to drape a digital screen over every large animal in Yellow Stone, and someone thought they could make a buck selling advertising space on those screens, it would already be done. “This American Bison brought to you by Brand X.”

It’s a bleak view but one that’s not so far-fetched. Some cities are now proposing legislation that would stop or limit screens in an attempt to reduce digital advertising clutter. As reported by 16:9, this is not just a U.S. phenomenon. A grassroots campaign in the UK is fighting the rise of large format digital ads.

It’s not unreasonable to imagine the invention of glasses that could filter out screens completely – a walking adblocker. In the meantime, our brains are doing the work for us. Website ads have become so pervasive over the last 15 years that now, “users have learned to ignore content that resembles ads, is close to ads, or appears in locations traditionally dedicated to ads.” – Nielsen – Banner Blindness Revisited.

Selective attention is not just a behavior of preference, it’s environmental conditioning, and it applies to more than just online advertising. Do we think most passersby in Manhattan pay attention to the average digital signage campaign? Not just see it but absorb it? Connect with it? Remember it? As OOH becomes more digitally focused while still relying on old methods of monetizing content, our ability to tune it out will only grow stronger.

Advertising agencies have historically understood the need, audience, and science for this type of communication. But now, anyone who owns a screen is the decision-maker.

You would think someone in my field would love the explosion of large format digital. I still believe they can be a resource for incorporating beauty in our cities – a way to tell stories, spark imagination, rally communities, or create moving art. It’s not the screens so much that we need to rethink – it’s the Intent and the Content.

Intent: Broaden the Function and Possibilities

The fallacy is that there is only one way to get a return from digital screens. For many, the screen is simply an opportunity to sell advertising spots. The formula for monetization goes something like: Steady crowd of people + screen x ad sales = success.

When it comes to direct advertising, the expectation is that at least some of those eyeballs will look at the ad, then remember it and take some sort of action later. But we’ve already talked about the issues with getting people to pay attention to traditional advertising content. There are, however, many other possibilities for large format digital. Methods that still result in a financial payoff and, quite possibly, create longer-lasting, residual value.

Brands creating display art for public consumption is nothing new. F.A.O. Schwarz and their holiday windows are a prime example. They use the moment to wrap context and emotion around their products – to create a sense of wonderment that represents the in-store experience. This effort is an extension of the brand and works as an attractor. The people who stop to marvel at the F.A.O. windows are drawn inside to shop. They leave and spread the word, and more people stop by to view, and they too will likely shop.

This concept is still not well utilized within the realm of digital signage. Even though, as with FAO’s windows, the possibilities are there for OOH digital to tell stories, create moods, and encourage actions.

The fact is, people spend time in beautiful spaces, near beautiful things. When the intent is increasing time spent in a place, increasing engagement and retention, increasing word-of-mouth, the long-term financial value has greater potential.

Traditional ad content is about displaying a message that the creator wants you to see right now. Often meant to drive a transaction in the near future. This approach puts the viewer’s needs second. But if the content mix in a campaign is 95% advertising and only 5% narrative or entertainment or brand values, any passersby who may be open to engaging in unique content now have a 95% chance of seeing (re: ignoring) an advertisement instead.

The function and possibilities of OOH advertising used to be quite narrow but no longer. Even artistic pieces can have functionality – they contribute to placemaking, setting a mood or expectation for a brand interaction, communicating brand values that resonate with an audience.

Companies like Nike create useful branded content relevant to their product line but not directly advertising the product. The approach allows people to get closer to the brand. It starts a deeper conversation with the customer. The function is not always directly advertising.

Screens can do a lot to help a city if we can look beyond a singular use and employ methods that are more symbiotic. It doesn’t mean companies shouldn’t expect a return from their OOH efforts. But when the purpose is built around entertainment, decoration, creating a sense of community, storytelling–content that puts the viewer first– both the brand and the city benefit.

Help us Help You by keeping the only Independent Voice for OOH.
Billboards and Out of Home. Please subscribe its still free. Please click here to ⇒Subscribe to OOH Today