The Museum of Contemporary Art Denver (MCA Denver) reopened on July 1, 2020, with Nari Ward: We the People, a major retrospective of the artist’s work, featuring a selection of sculptures, paintings, videos and large-scale installations that highlight Ward’s status as one of the most influential sculptors working today. Simultaneously, Ward and MCA Denver have partnered with Orange Barrel Media, IKE Smart City and the Denver Theatre District to launch a companion public art project throughout downtown Denver, on view from July 1 to September 20. The public exhibition debuts a major, new site-specific work by Ward for projection on the Daniels and Fisher Clocktower, a historic 325’ tall structure at the center of the city.  Watch the 74 second video.

Through this expanded project, the artist and MCA Denver have radically widened the audience for Ward’s work, which directly addresses many of today’s most urgent issues concerning racial justice and
equity. It is estimated that this public art project will reach a daily audience of 385,000 and a total
audience of more than 31.5 million throughout the run of the exhibition 1, not only providing opportunities to engage with art during a time of social distancing, but also working toward more
equitable accessibility to Ward’s body of work.

“We are so pleased to partner with Orange Barrel Media to bring Nari Ward’s profound, poignant works
to a broader audience in the center of Denver. We hope these digital works foster meaningful dialogue,
especially at this critical moment in our city and nation, as we reckon with so many of the issues raised
by Ward’s work, such as the legacy of slavery, systemic racism, and police brutality,” said Nora Burnett
Abrams, MCA Denver’s Mark G. Falcone Director.

Images of Ward’s iconic wall-drawings, which the artist creates by drilling shoelaces into architectural
walls to form images and texts, will appear in both their original color iterations and in black-and-white
versions on massive digital billboards and the screens of OBM’s IKE Smart City pedestrian kiosks. Taking
a cue from MCA Denver’s expanded exhibition design, which includes a two-story reverse black-and white image of Ward’s signature work, We the People (2011), on its glass facade, Orange Barrel Media
worked directly with the artist to select images featuring other “shoelace” works to appear throughout
downtown Denver. The selected group of works capture the urgent political energy of our moment;
including images of protest signs and the Black Power fist, text-based pieces that feature iconic song
lyrics relating to social change such as “We Shall Overcome” and “Blowin’ in the Wind,” as well as the
last words of abolitionist John Brown as he was led to his execution: “This is a beautiful country.” These
powerful texts and symbols will animate Denver’s urban corridor while bringing critical aspects of MCA
Denver’s exhibition outside to a broader public.

Additionally, Ward has produced a major new public work, LAZARUS Beacon (2020), which exists as a
wall-based work at MCA Denver and has now been realized as a multi-story projection for Denver’s
iconic Daniels and Fisher Clocktower. This video is based on poet and activist Emma Lazarus’s sonnet
“The New Colossus,” published in 1883, that appears on a bronze plaque in the pedestal of the Statue of
Liberty. The sonnet was written to help fund the building of the statue and expresses the credo of the
United States as a maternal country where all exiles and immigrants are welcome. Ward’s work isolates
and highlights the subjects of this poem, among them the tired and poor––all of those to whom the
country has promised to offer shelter.

Ward’s digital project and the clocktower video bring together some of the most salient aspects of the
artist’s practice to a broader public. These works remind us of the long and continued history of the
political and social battles that have been necessary to fulfill the promise of the United States, and of
the important role each of us has to play in realizing these changes. 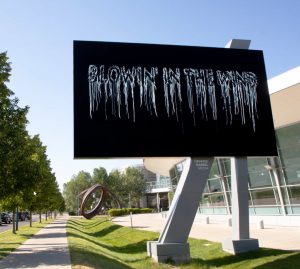 This project was curated by Diana Nawi on behalf of Orange Barrel Media. It continues an ongoing
collaboration between Nawi and Orange Barrel Media, including projects in Los Angeles, Atlanta and San
Jose, among other cities. Orange Barrel Media and sister company, IKE Smart City, are the leading
operators within the Denver Theatre District, a geographic area within the urban core that allows for
creative digital and static commercial signage under a unique revenue sharing model that generates
revenue to support public art and other placemaking activity to enliven and animate the area. This
innovative model, which was pioneered in Denver, has now launched in Atlanta and is being considered
by other cities and community benefit districts seeking to generate a non-tax source of funds to support
public art and other major cultural projects in downtowns. Orange Barrel Media is a national leader in
this space, developing urban media projects that utilize an advertising model to generate funds for
public benefit. “Night Lights Denver”, the ongoing projection art series at the Daniels and Fisher
Clocktower, was installed in 2019 with support from the Denver Theatre District, Downtown Denver
Partnership and Orange Barrel Media and was named “Best Free Entertainment” by Westword
newspaper.

“We’re very proud to work with Nari Ward and MCA Denver to share this important work with the
Denver community, an especially critical and necessary objective during these unprecedented times. The
project exemplifies our ongoing commitment to utilize our powerful platform to enrich the communities
we serve.” says Orange Barrel Media CEO, Pete Scantland.

IKE Kiosks located throughout downtown on 16th Street between Wynkoop and Broadway as well as
14th & Curtis, 15th & Curtis and 15th & Champa