The copy read: “Everyone’s welcome at our BBQ. Not Djoking.”  The mobile message debuted at the Australian Open according to B&T, where Djokovic was scheduled to defend his Australian Open title he had won the previous year.

Djokovic who is not vaccinated, was seeking a record 21st Grand Slam singles title which would have placed him ahead of Federer and Nadal. Arguably the best tennis player of all time, Djokovic was refused entry to Australia over his request for a Covid vaccine exemption. He challenged a ruling in court as a judge allowed him to enter the country. The challenge denied, his visa revoked a second time, losing his final attempt to stay and play.  Stay tuned for the next slam which is in France where the country also has a vaccine law which would prohibit Djokovic’s entry.

Back to the Australian Lamb billboards driving around at the @AustralianOpen ; the mobile billboard is an example of the quick and targeted execution OOH delivers much like one of OOH Today’s sponsoring advertisers, Do It Outdoors can provide. Though ‘dio’ did not serve up the Australian grilling copy, Regis Maher, President at Do It Outdoors, assures us the best damn curbside real estate available, is a Do It strategy which he can deliver at any venue or region. 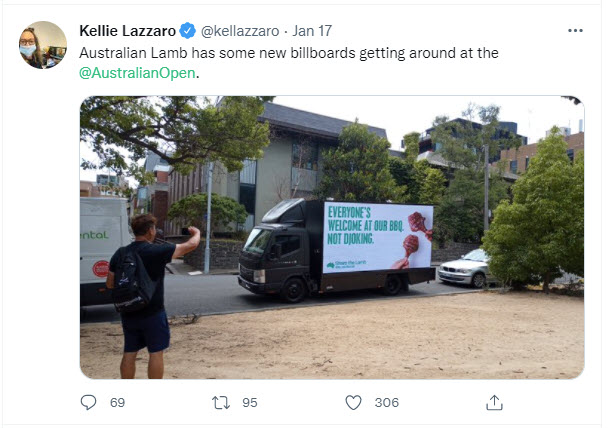