Is Covid-19 Traffic Down? Here’s a Report Showing the Last 81 Days in 5 Major Markets

How Traffic is Really Impacted Due to Coronavirus Shutdowns

Skip past the first two paragraphs if you want to avoid my soapbox and start at paragraph 3.

If you have been keeping up with OOH Today posts and podcasts, then you know we are frustrated at the lack availability of impression/traffic counts with regards to the impact of the Coronavirus.  We are even more frustrated by the knuckleheads out there who are saying traffic is not impacted or only slightly impacted or the latest, “we don’t guarantee impressions.”  What the hell? Are we losing our minds or forgetting our integrity?  Did some have neither?

Frankly, we do not know why this information has not been made readily available to everyone.  Failure leads the OOH Industry back into a question of transparency and credibility. Just when we were turning a corner on measurement, with mobile devices and other technology leading the way, we are risking losing those gains by what has been suggested to me as ‘OOH hiding out’.

In fairness, perhaps traffic reporting is taking more time to uncover the data then what we feel it should. Regardless, not to be detoured, OOH Today had discussions with a handful of organizations whose job is to stay on top of traffic data. We obtained information from UberMedia. This data is not what we are used to as a ready made data set for OOH. The analysis is excellent.  It is what it is and none of us will like it. It is the proverbial sandwich we all hate having to take the bite out of.

We requested data for specific area and intersections of ‘highways’ in these 5 markets; San Francisco, New Jersey/New York, Downtown Los Angeles, Chicago, and Seattle. As you will see in each market by market breakdown, traffic is significantly reduced. All cities experienced a dramatic drop in traffic during the study period, with Los Angeles being the greatest decrease in observed devices on freeways (-79.57%) and Chicago being the least (-58.43%).

TO BE CLEAR, this data as it is presented, is not intended to replace or be used as traffic counts or impressions. We believe that task is strictly the function and expertise to be left to Geopath.

The data below, demonstrates the traffic reduction impact occurring as a result of the Coronvirus shutdowns. We all know empirically, traffic is reduced considerably by what little driving we are doing ourselves and making spot checks at key intersections and highways during typical drive times in AM and PM.  We are clicking on public traffic cams around the country and last but not least, the simple awareness that most all of us who are reading this, have been working from home under self quarantine, the last 7 to 14 days. There is no change indicting we will return to the office in the near future.

We welcome your comments on the data and report below.

The Impact of Coronavirus Closures on Commuting Patterns

As news of confirmed COVID-19 cases spreads across the country, state and city officials enact policies, employees go remote (if possible), and events are postponed or cancelled. Major cities, including San Francisco, New Jersey, New York, and Los Angeles, have all enacted stay at home orders, but was that the tipping point for commuters? Did people start staying home once COVID-19 had a confirmed presence in their cities? Or did it take some other event (like school closures or the cancellation of major sporting seasons) to enact change?

Freeway travel was identified by comparing samples of mobile location signals from devices observed in major traffic corridors in San Francisco, New Jersey/New York, Downtown Los Angeles, Chicago, and Seattle during the spread of COVID-19 in the United States and noting the changes in the amount of devices in each traffic corridor by day.

In order to determine whether or not a device was present in one of the traffic corridors on a given day, we first utilized precise study polygons to accurately identify if/when a visit occurred on a freeway of interest. Study polygons included the San Francisco Bay Bridge, the I-95 New Jersey into New York, the I-10 and I-110 in Downtown Los Angeles, the I-90 and I-290 in Chicago, and the I-5, I-90, and I-99 in Seattle.

Our goal was not meant to capture every car, truck, or SUV that traveled through these traffic corridors during the duration of the study. This is because when analyzing devices in a study polygon, you can only ever see a sample of actual visitors to that study polygon. Not everyone opts into sharing their location data with apps, for example, and even in the case of a large dataset like UberMedia’s with 250 million active US devices, it will not contain data from every single device that travels in a given area. Instead, we harvested data from enough observed devices to achieve a 95% confidence interval in our sample and then compared that sample day over day to remain consistent over time.

Traffic through the SF Bay Bridge traffic corridor drops significantly when San Francisco declares a state of emergency on February 25 and has continued to trend downward as more policies have been enacted by both the city of San Francisco and the state of California.

On February 25, when San Francisco announced a state of emergency, traffic dropped 27.01% when compared to one week prior.

On March 19, when California announced a stay at home order and school closures, traffic dropped 46.27% when compared to the previous week.

Traffic around Downtown Los Angeles ebbs and flows for a few weeks following the first confirmed case of COVID-19 at LAX. Starting at the end of February, traffic began to trend downward, with the cancellation of major sports league events correlated to one of the largest drops.

There was little impact on traffic when Los Angeles announced a state of emergency on March 4, with a 2.14% increase in traffic vs. one week prior.

When LA Schools close on March 14, we saw a 42.14% reduction in traffic when compared to the previous week.

When Governor Gavin Newsom announced the stay in order on March 19, there was a 32.61% reduction in traffic compared to the previous week.

The commute from New Jersey into New York remains consistent until the first week of March, when both New Jersey and New York confirm their first cases and both states announce a state of emergency. Once New York bans large gatherings on March 12, traffic steadily declines.

When New York and New Jersey announced their stay in orders on March 20 and March 21, respectively, traffic dropped 58.06% compared to the previous week.

Traffic in Chicago continues for well over a month after the first case of COVID-19 is confirmed, and only sees a trend downward after the Illinois governor issues a disaster proclamation on March 9.

Traffic dropped 36.76% the day after Illinois schools were cancelled on March 17.

Freeway traffic around Downtown Seattle decreased after Washington announces a state of emergency on March 2.

When restaurants closed for sit-down dining on March 15, traffic decreased 27.93% when compared to the previous week.

When Seattle closes schools starting March 17, traffic in Seattle dropped 25.48% when compared to the week prior.

It appears that school closures associated with COVID-19 have had the biggest single impact on a city’s commuting patterns when compared week over week. The only outlier was the commute between New York and New Jersey, which was most impacted by the stay in orders issued by the state.

For further information or questions contact Jon Freeman at UberMedia 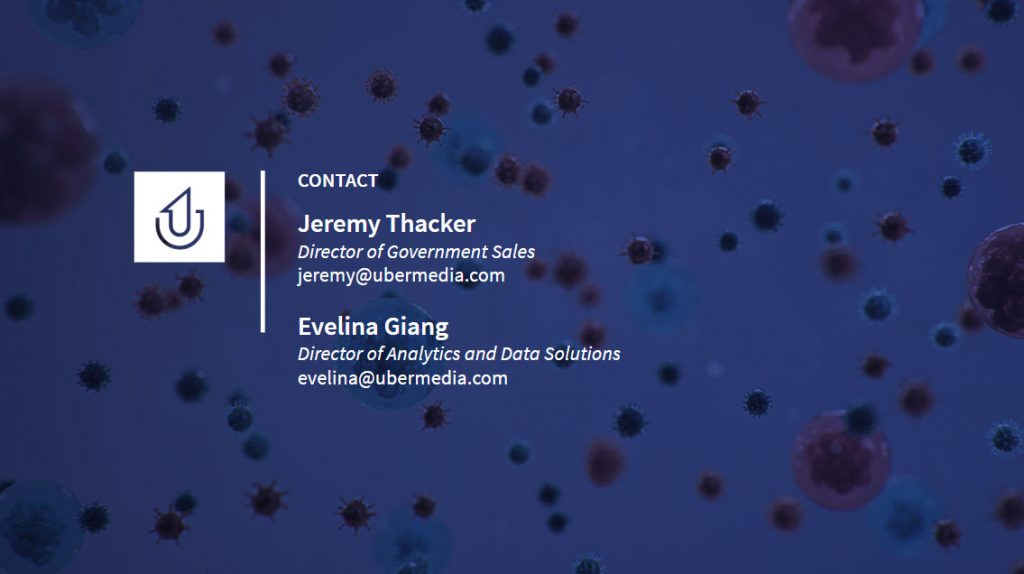