The new LED display measures 13’4″ high by 43′ wide and sports a 50-foot convex radius so pedestrian and automobile traffic throughout the intersection can view its content. Directly across the intersection from the digital is the entrance to the Peachtree Center station for Atlanta’s rapid transit authority (MARTA). 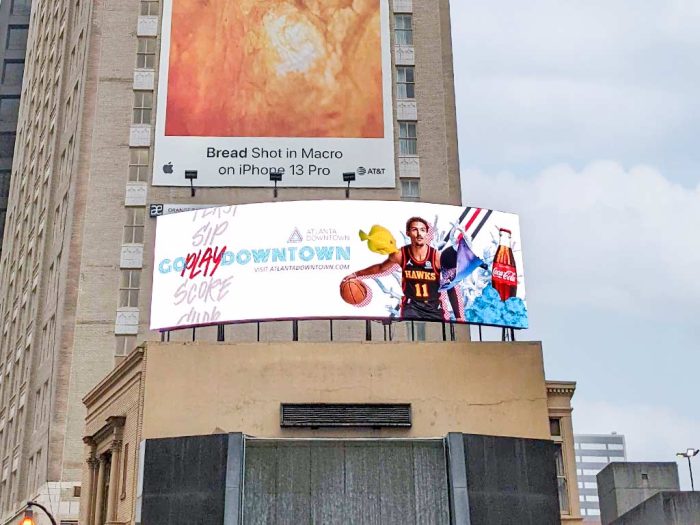 Built from SNA Displays’ EMPIRE™ Exterior line of products, the screen has an 8 mm pixel pitch and more than 830,000 pixels (510 x 1,640). The rooftop display sits just above a waterfall feature interspersed with columns.

“While large, flat LED screens can be very effective, the curved design is perfect for this intersection,” said Tony Kaiser, project manager for SNA Displays. “Orange Barrel Media is at the cutting edge of urban out-of-home media, and we’ve partnered with them on numerous projects, often customizing video screens in increasingly imaginative ways.”

Georgia-based Henry Incorporated performed installation services for the display. The three-story building at 140 Peachtree is a historic landmark. Built in 1911, the small building has been home to the Hillyer Trust Company, Citizen and Southern Bank, and most recently Breen Smith Advertising.

About Orange Barrel Media
Orange Barrel Media, founded in 2004, is a leader in unique outdoor media that adds to the character of urban places. They offer services such as permitting, constructing, and managing large-format digital and static displays.

About Henry Incorporated
Henry Incorporated is a turnkey, specialty fabricator that helps provides services such as pre-construction and project management, engineering, production, finishing, and installation.