Number 2's of the world, arise!

In business, as in life, there are leaders and challengers. Leaders are usually the first-movers, with high brand awareness and dominant market share. Challengers are typically the fast-followers. Smart challengers try to avoid competing directly with leaders. Instead, they flank the leader by identifying unmet needs and exploiting profitable niches.

But here’s the thing. Challengers can become leaders, especially when leaders become complacent. Sometimes, leaders are so invested in protecting their profitable cash cows that they become too cautious and fail to innovate. Other times, success makes leaders slow-moving and resistant to change. When this happens, leaders become vulnerable, challengers can leapfrog leaders, and a new order can emerge.

History is full of challengers that have taken this route, including brands like Apple, Netflix, Tesla, and Airbnb. These challengers found a different way, celebrated their outsider status, and turned it in to a competitive advantage. They ‘embraced their inner underdog’ and became brand leaders themselves.

During periods of social and economic disruption, underdogs can leap ahead. When the outlook is uncertain and the rules of the game are in flux, underdogs offer people hope that overcoming adversity and beating the odds are still possible. 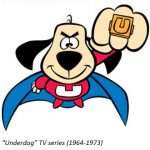 Some readers may remember the TV cartoon classic, “Underdog”. In his day job, Underdog was just a regular guy (or regular pup) who worked as a shoeshine man at the local newsstand. But when danger lurked, Underdog transformed into a rhyming, flying canine superhero. Everyone rooted for Underdog. He was the coolest.

The underdog narrative is as old as history itself. We identify with the underdog because we see ourselves in his or her struggle. Underdog stories are a core part of our collective American identity, from Cinderella to the Wizard of Oz, from the American Revolution to the American Dream. We enjoy unexpected outcomes and dramatic cliffhangers. When you think about it, even college basketball’s Final Four is a great underdog story.

America is a perfect market for underdog brands. We admire bootstrappers and entrepreneurs, and the bigger the comeback story, the better. We root for unlikely heroes. We believe in self-improvement and second chances. We reward hard work, passion, and perseverance. We encourage fair play and honest competition. We think the best man or woman, and the best idea, should always win. 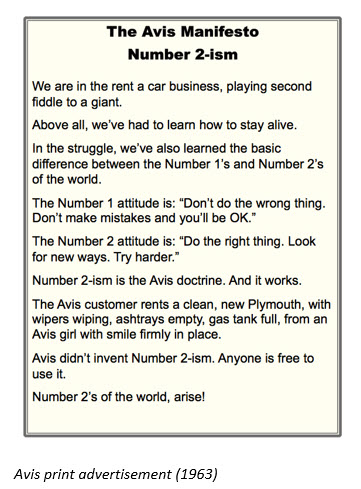 Back in the 1960’s, Avis embraced its inner underdog to take on #1 rental car company Hertz. The Avis brand manifesto “Number 2-ism,” and its tagline “We Try Harder,” successfully positioned the brand as a hungrier, scrappier David battling Goliath. Avis couldn’t afford to take a single customer for granted. Avis tried harder, because as the #2, it had to.

One of the best underdog stories of all time is Apple. It’s hard to believe Apple almost went bankrupt in the early 2000’s trying to compete head-on with Microsoft and Intel in the personal computer market. That changed in 2006, when Apple launched the Macintosh computer with its award-winning “Get a Mac” advertising campaign. “Get a Mac” spots introduced a young, cool, informal character dressed in jeans and a t-shirt as a Mac computer, and contrasted him with an older, square, corporate-type dressed in an ill-fitting suit as a PC. Apple cleverly exploited a key vulnerability of the PC with an entire generation of people, and the rest is history.

Brands that embrace their inner underdog have built-in advantages. They are more relatable. Their quest is familiar. They are given the benefit of the doubt. They command more loyalty. They have the customer cheering for them.

As the Avis manifesto said, it didn’t invent “Number 2-ism” and anyone is free to use it. Agile challengers, take note.

Lee Rafkin is a branding, marketing, and communications consultant based in New York. In addition to advising leading brands like Discovery Networks, Estée Lauder, Medtronic, Nestlé, and Pepsico, he named and branded the U.S. out of home organizations OUTFRONT, Geopath, and Boldsite Media. Lee can be reached at lee@rafkin.com.

The views, thoughts, and opinions expressed belong solely to the author, and not necessarily OOH Today.