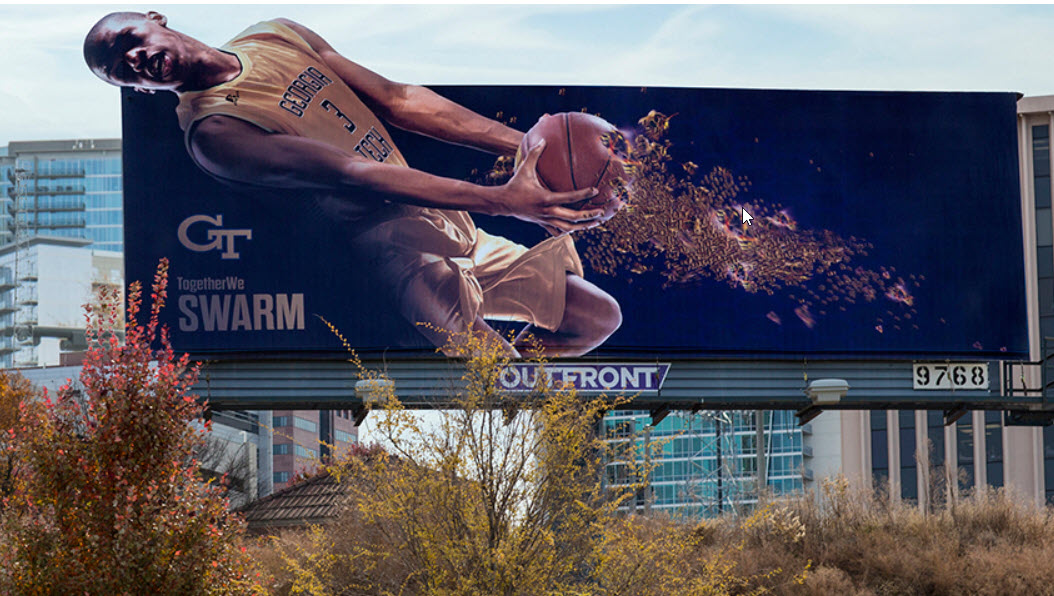 Creative makes the Billboard.  Unimaginative OOH has no impact on advertisers.

Reading a recent post from National Creative Director at OUTFRONT Media, Eddy Herty, reminds us of a Sam Clemens quote, who wrote under the pen name, Mark Twain, “Clothes make the man. Naked people have little or no influence on society.”

We think Eddy Herty would stand behind us in our paraphrasing Twain: Creative makes the billboard. Unimaginative OOH has no impact on advertisers.

Herty, penned a commentary appealing to those who touch the design side of Outdoor Advertising. (And as we have said before, Everyone is responsible for reviewing artwork in your office/company?).  Herty’s petition is intended for everyone, #OOH Company, Agency —local and national and client direct, to pause and consider the implications and opportunities to designing a billboard or your next OOH creative.
To his credit, National Advertisers are not immune to censure as he pokes at the largest advertiser in the OOH Industry, McDonald’s, and rightly so, for some unimaginative roadside creative. (Our description not his).

National Advertisers are not immune to censure for their unimaginative creative.

Below find Eddy Herty, “Wait… you design campaigns?” with the support of his team of over 40 Designers, Art Directors and Creative Directors, sharing straight talk on why you need a strong resource to create your next #OOH campaign.

I have no doubt that if you told an agency they didn’t have to worry about the Out of Home portion of their campaign, that the internal creative team at their local billboard company would take care of it… they’d laugh and say in a loud, firm, somewhat aggressive tone, “No”. I get it, I used to think the same way, that the majority of in-house creative departments for outdoor companies were nothing more than a glorified production department that was vaguely familiar with photoshop. It’s not hard to see why this is the common belief… just drive down any major interstate look at the next McDonald’s directional you see and take-in the massively oversized “M” and obnoxiously large yellow arrow with the words “EXIT NOW”… if you’re lucky, it might even say “NOW SERVING BREAKFAST ALL DAY”… just in case you’ve been in a coma for the last 12 years and didn’t know that. So again, I get why that’s the perception, one that the Out of Home industry has given to itself. That is changing, and era of consultative designers are literally changing the face of outdoor advertising.

the majority of in-house creative departments for outdoor companies were nothing more than a glorified production department that was vaguely familiar with photoshop.  That is changing, and era of consultative designers are literally changing the face of outdoor advertising.

There are groups, like OUTFRONT Studios, who are taking the time to care for and show respect for the brands we work with. Everything from the mom & pops who don’t have a marketing resources and need our help to working closely with national brand’s like Coke, Edible Arrangements or Nestle waters, ensuring their needs are met. I know what you’re thinking… why on earth would a brand like Coke need our help… they work with the top agencies in the world. Know what, you’re right… for the most part, they don’t need our help. However, there are times when an agency just doesn’t have the bandwidth, or literally, the time to actually execute a 150+ display station domination with motion in a week and if they can’t get back-up at a reasonable price… it’s not going to happen. Or, there are some agencies that are just kick-ass when it comes to print or TV, but OOH isn’t exactly what they’re known for. Perhaps, it’s as simple as just needing someone who works in this industry day in and day out to fly out for a brief conversation to talk through some interesting outdoor opportunities in a market like Boston. It’s times like these that OUTFRONT Studios, a team of over 40 Designers, Art Directors and Creative Directors, can step in and make sure the brand that’s advertising can stay intact and meet the crazy deadlines that we sometimes find ourselves having to meet.

It’s in those moments that a mix of billboards, and transit can make or break a campaign. For brands that pass over working with us, they’re literally passing over the foundation, the stronghold of an entire campaign. It’s the constant repetition of Out of Home, the visual screaming of a message that acts as a driver to digital campaigns. I swear, I know being in the creative field I shouldn’t be spouting off statistics and numbers, but pairing your OOH with mobile increases click-throughs on your digital campaign by 48%! Seriously, if you’re working at an agency, I know you’ve poured hours upon hours of blood, sweat and tears into the perfectly crafted copy line and key art. Why on earth would you willingly prevent people from seeing your campaign? That would be like an artist saying, “Nah, I’d rather not sell more prints if I can’t painstakingly produce each print myself.” Why wouldn’t you trust my team, let us work as closely as possible with you and let your campaign live and breathe on a medium that can scream to thousands of people and at the same time, whisper to individuals. That’s the power of Out of Home, and that’s how we can help.

It’s in those moments that a mix of billboards, and transit can make or break a campaign… the visual screaming of a message that acts as a driver to …campaigns

Regardless of what your perception is of the Out of Home industry or creative departments, like OUTFRONT Studios, I would ask that whomever you work with, to be open to having at least one conversation with them before deciding whether or not to work with them. If that conversation is based on a rate, location or “whatcha want on your sign?”… run. If that conversation is based on you, your business and how your company is of value to people, give us a shot. Give us an opportunity to change your perceptions and show you that, yes, we do design campaigns.