In a sweeping proposal, Clear Channel Outdoor and the City of San Antonio are considering what would be the single largest reduction of #OOH faces in the city’s history. It is an agreement to remove nearly 300 #billboards, or one-quarter of the total inventory, in exchange for a City Council approval of the deal and ordinance, which would allow two-sided digital OOH. Clear Channel would  install up to 13 digital billboards on the back of existing locations. Currently, only one side is permitted and it would allow adding to the ‘backside’ of existing locations while not allow building new structures. One quarter of the inventory is broken down as 265 junior posters, 11 bulletins and 49 ‘other structures.’

A vote is scheduled for April, with a two month term prior for public comments.

There is more tough sledding for CCO: A community survey will be conducted

There is more tough sledding for CCO: A community survey will be conducted via the City’s SASpeakUp website. Using Survey Monkey, the community input will allow for comments including determining what large billboards will be taken down.  We encourage you to check out the survey listed as Digital Billboards in San Antonio City Limits

Don’t feel too concerned for Clear Channel.  They have a winning history with the City.  Ten years ago, when installing the first digital structures, CCO took down 83 static faces to add 12 digital faces. Twelve times eight segments equals 96. That was a favorable exchange. Though the ratio is calculated in square feet, this time around the take-down count is considerably greater. But come on, losing junior panels which are typically poorer demand format and in lesser locations in light of larger faces, the revenues should be significantly greater. The supply and rates will no longer be pulled down by the former ‘juniors.’

Scroll to the bottom of the page below for maps breaking down the location inventory by format. 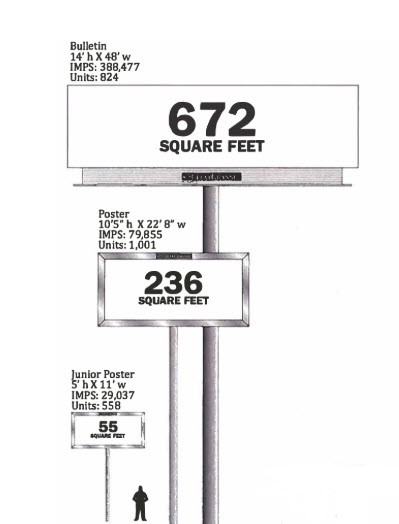 Courtesy / City of San Antonio
All of Clear Channel Outdoor’s off-premise “junior posters” are slated for removal, pending City Council approval.  For those of you who are OOH challenged(I find myself there often) and wondering why the number listed in the image above adds up to more than 1200, remember most billboards are double-sided.

From NYC to Portland —Solve While You Sip