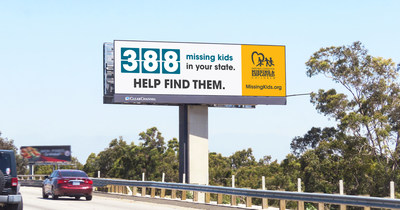 The national campaign, supporting the local effort, will reach millions in cities across the country over the next month using CCO’s digital billboards, including in Chicago, Los Angeles, New York and Washington, D.C. The creative showcases a series of stunning statistics illustrating the number of missing children in each state and the message “Help Find Them.” For 15 years, CCO has tapped the real-time capabilities of its DOOH media network to help recover abducted children through the posting of AMBER Alerts on its digital billboards. This new campaign extends that effort and underscores the company’s ongoing commitment to child safety.

Children go missing every day in the United States, and while most are found quickly, some remain missing for months and even years. This is a reminder that child safety should remain a priority for communities across the country. When a child is reported missing to law enforcement, federal law requires that child be entered into the FBI’s National Crime Information Center, also known as NCIC. According to the FBI, in 2021 there were 337,195 NCIC entries for missing children.

The Texas campaigns specifically feature individual missing children’s cases across CCO’s DOOH displays. The child’s photo is included in each message, and in some cases, the child’s age progression photo is shown if the child has been missing for an extended period. Each child’s image will run across multiple digital billboards in each Texas city thousands of times per day on each digital display.

The Texas Department of Public Safety Missing Persons Clearinghouse received 46,581 missing person reports in 2021 with 33,774 being juveniles. CCO is providing this month-long public service campaign at no cost in partnership with the Texas Center for the Missing, Houston’s Amber Alert Provider and NCMEC.

“At the National Center for Missing & Exploited Children, we know the power of pictures and community action. Clear Channel Outdoor is in a unique position to leverage their digital space to help bring home missing children and we are thrilled to be able to fight for a safer tomorrow with CCO,” said Gavin Portnoy, Vice President of Communications and Brand, National Center for Missing & Exploited Children. “Always, but especially on National Missing Children’s Day, we encourage the public to pay attention to the photos of missing children and report any information they may have. It only takes one person to bring home a missing child.”

“With over 8,000 children reported missing from Greater Houston in 2021, partnerships like these are critical to reuniting families and ensuring the safe recovery of at-risk missing children,” said John McNamee, CEO, Texas Center for the Missing.

“Clear Channel Outdoor began this program over 10 years ago and has reunited a number of children with their families which is the most rewarding service we can perform for the communities where we operate,” said Lee Vela, Vice President, Public Affairs, Clear Channel Outdoor-Houston. “Digital billboard messages have worked repeatedly to help find these children and we are honored to play a role in this safety campaign alongside NCMEC and Texas Center for the Missing.”

2022 Missing Children Cases featured across Texas in this program include:

In 1983, President Ronald Reagan proclaimed May 25th as National Missing Children’s Day. National Missing Children’s Day is a reminder to all parents and guardians of the need for high-quality photographs of their children for use in case of an emergency, and for the need for everyone to pay close attention to posters and photographs of missing children.