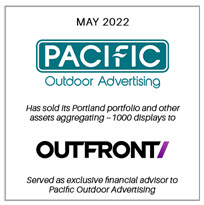 Solomon Partners served as exclusive financial advisor to Pacific Outdoor Advertising on the sale of its Portland, Oregon and Clark County, Washington assets to OUTFRONT Media

Pacific Outdoor Advertising, the Northwest’s leader in out-of-home advertising with dynamic outdoor advertising locations throughout Oregon and Washington, has sold its billboards and certain other business support assets in Portland, Oregon and Clark County, Washington to OUTFRONT Media (NYSE: OUT). The sold advertising assets include 211 large-format static displays, 21 digital displays, 709 posters, and 15 walls.

Portland is a rapidly growing market, having moved from the 25th ranked Nielsen Designated Market Area (“DMA”) to the 21st ranked DMA in just the last five years. This new market for OUTFRONT represents the establishment of an urban-market foothold in the Pacific Northwest, and a significant expansion of OUTFRONT’s inventory, which already includes billboards in the non-urban areas of Oregon and Washington.

Why Launching During the Pandemic Worked Out for Adkom