The  Geopath team recently released two OOH spending reports with data sourced from Kantar, covering second quarter spending, as well as a report covering spend from January-June. Both reports are available to our members via the  GeekOut Library.

For today’s Fast Fact Friday, we are continuing our series examining the top OOH spenders in DMAs across the country. For today, let’s venture out to the twenty-third largest DMA in the country and the “Gateway to the West,” St. Louis, MO. We will not only look at which advertisers and industries are spending within the market, but also highlight any changes from the first to second quarter.

According to Geopath Insights, there are 5,300 roadside and place-based units measured by Geopath in this market, so it will be interesting to understand which brands are utilizing OOH to reach their audiences in STL.  With that said, let’s take a deep dive into the STL market! 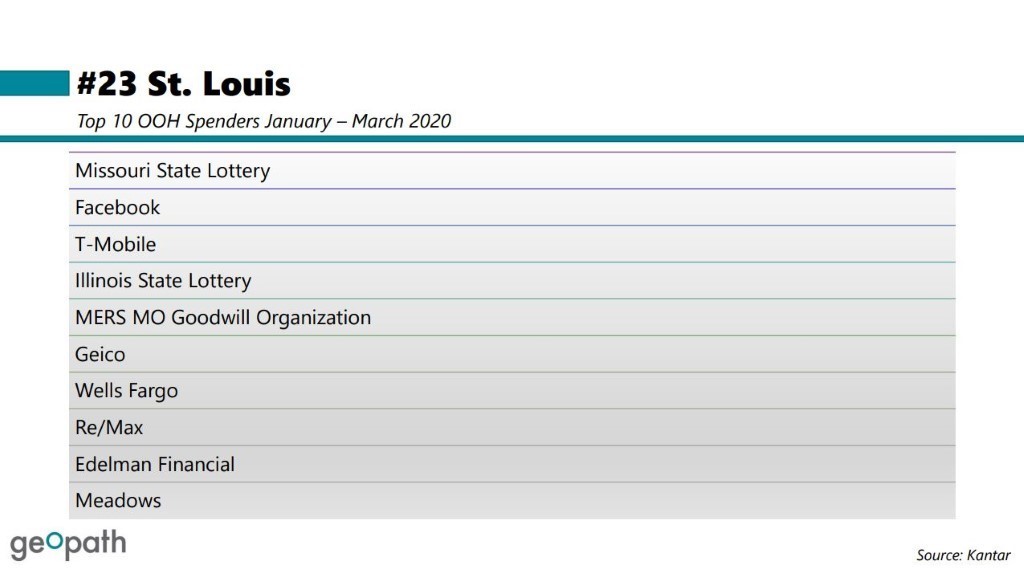 From January until the end of March, the top spenders were predominantly from the Government, Insurance, and Real Estate sectors. Additionally, the financial industry was also represented, with Wells Fargo and Edelman Financial holding positions on the list.

With the onset of travel restrictions and other COVID-19 implications, OOH spending in the second quarter changed. Although some of the top OOH advertisers from the first quarter are still spending, other brands have emerged on the list of top spenders. See below for the  top ten spenders in the DMA for the months of April through June. 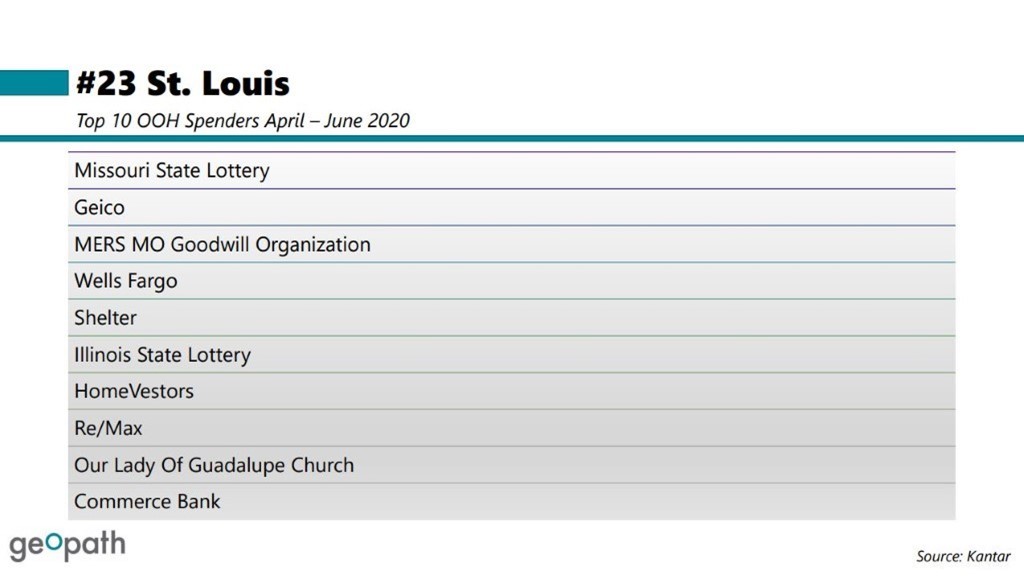 The insurance sector had some big movers between quarters, with Geico jumping to the second spot all the way from the sixth position! There were also two new entries from this sector as well, with Shelter Insurance and HomeVestors at the fifth and seventh spots, respectively.

In terms of other changes, Edelman Financial and Meadows Office Furniture fell off the list, but were replaced by Our Lady of Guadalupe Church and Commerce Bank in the last two spots. Compared to other markets, the top OOH spenders list in St. Louis remained relatively consistent, with only two of ten dropping from the list!

OOH TODAY believes all voices, not just the loudest, must be heard 4877 posts 617 comments