For today’s Fast Fact, we will be continuing our series examining the top OOH spenders in DMAs across the country.  With the publication of Q3 data from Kantar earlier this month, we will take a look at not only which advertisers and industries are spending within the market, but also highlight any changes between the second and third quarter. As a reminder, all spending and research reports are available to our members via the geekOUT Library.

With that said, for today’s analysis, let’s travel down to Florida, and look at the sixteenth largest DMA in the country; Miami-Ft. Lauderdale. If you’re located in the snow-filled Northeast like us at Geopath, the ‘Sunshine State’ sure sounds nice right now!

According to  Geopath Insights, there are 12,667 roadside and place-based units measured by  Geopath in Florida’s second largest market, accounting for 1.5 billion weekly impressions. Additionally, there are currently 37 Geopath members with audited inventory in this market, allowing advertisers numerous locations and format types to reach their target audiences across the urban center and surrounding areas. With OOH coverage throughout the market, let’s take a look at who was spending during Q2!  See below for the top ten spenders in the DMA for the months of April through June. 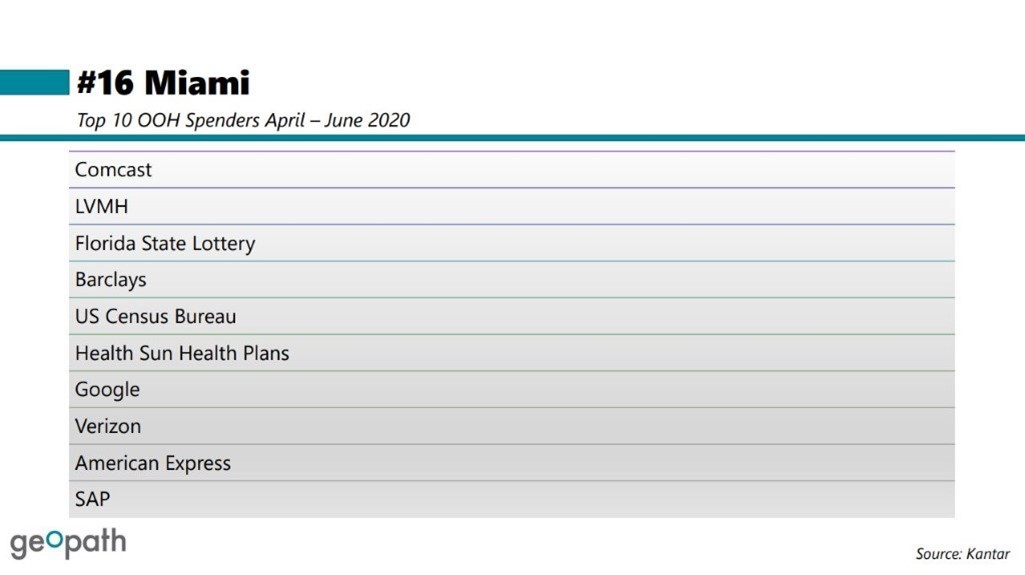 In Q2, brands spending within the market consisted primarily of advertisers from the government, communications, financial, and insurance sectors. These included, but were not limited to, organizations such as the Florida State Lottery, Comcast, Barclays, and Health Sun Health Plans.

However, third quarter spending reports from Kantar indicate there were some shifts in not only organizations, but also sector representation in the top OOH spenders within the  DMA during this period. See below for the top OOH spenders from July to the end of September. 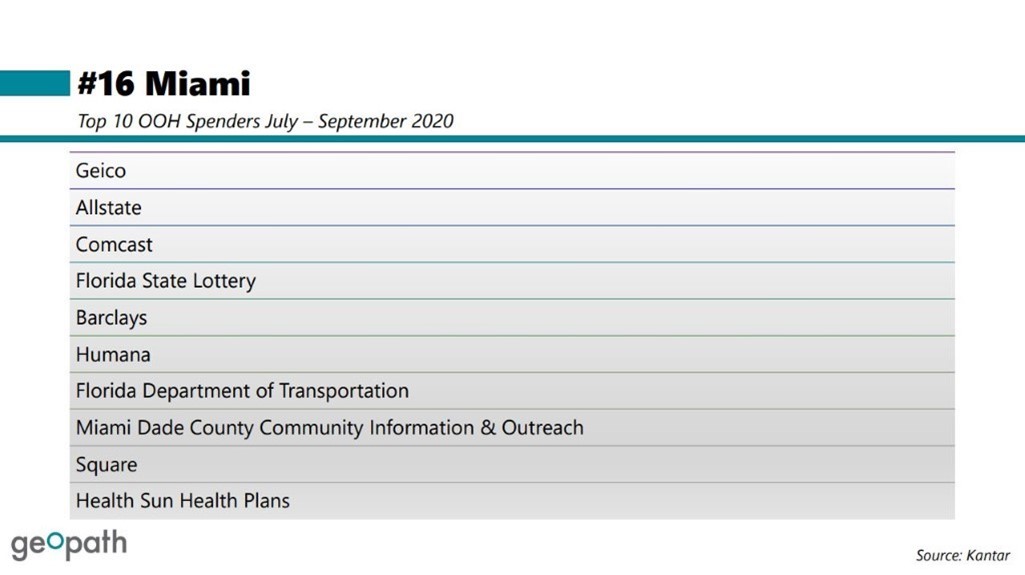 To start off, it’s interesting to note two newcomers to the list that not only spent enough to earn spots within the top ten, but also to take the top two positions. Geico and Allstate, organizations from the insurance sector that were not on the Top OOH spender list for Q2, now hold the two top spots. Comcast, which previously held the top position, was able to continue spending enough in OOH to remain within the top three.

In terms of other new arrivals, four other companies joined the top ten, adding representation to both the government, financial, and insurance sectors, making significant shifts on the lower half of the OOH spender list. Humana increased the representation for the health insurance field by taking the sixth spot, while the Miami Dade County Community Information & Outreach and Florida Department of Transportation joined the Florida State Lottery from the government sector. Although the financial sector lost representation from the previous quarter with American Express dropping off the list, Square Financial was able to replace them, now holding the eighth position.

If You’re in OOH Sales, You Should be in Cohoot

20 years ago the Billboard Printing Business Witnessed a…