For today’s GeekOUT Fast Fact, let’s travel to back to the Pacific Northwest, and revisit a DMA that we touched on last summer: Seattle – Tacoma. In August, we compared first and second quarter spending, and noted the top advertisers spending during these periods in Washington state’s largest market. With the release of Kantar advertising spend data for Q4, the Geopath team has compiled two reports so we can compare Q4 OOH spending to the full year of 2020.

Let’s see if anything changed for Q4 and what spending looked like for full year in the nation’s thirteenth largest DMA. 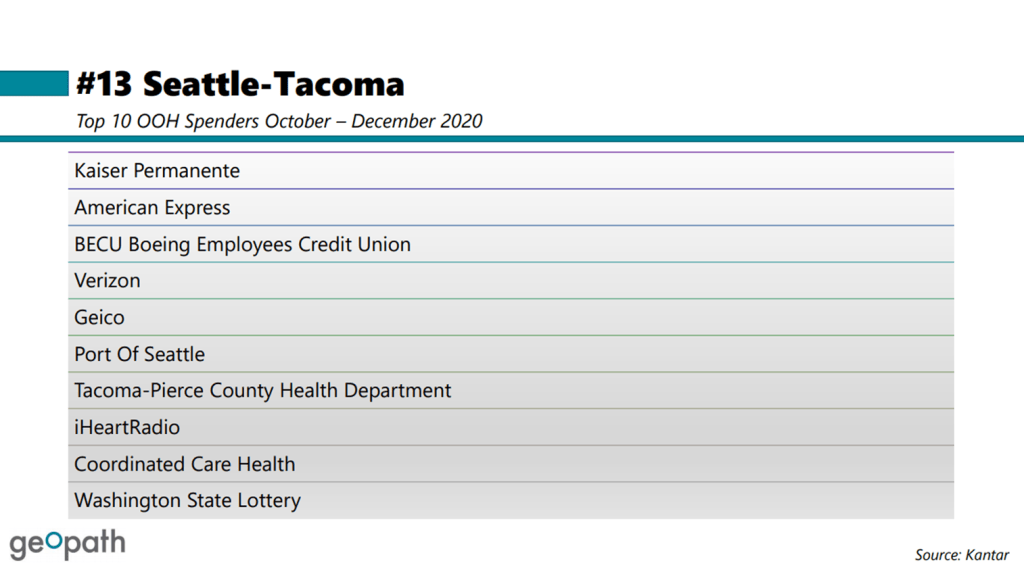 In Q4, the top spenders in OOH within the “Emerald City” were split between the Insurance, Financial, Communications, and government sectors, represented by companies such as the Kaiser Permanente, Verizon, Geico, and Port of Seattle. Kaiser Permanente was the top spender for the quarter, representing the insurance sector along with Geico in the fifth spot. Financial and government organizations took up half of the list, with three organizations representing the government sector, and two from the financial sector. Now, let’s see if spending was similar for the full year for these industries. 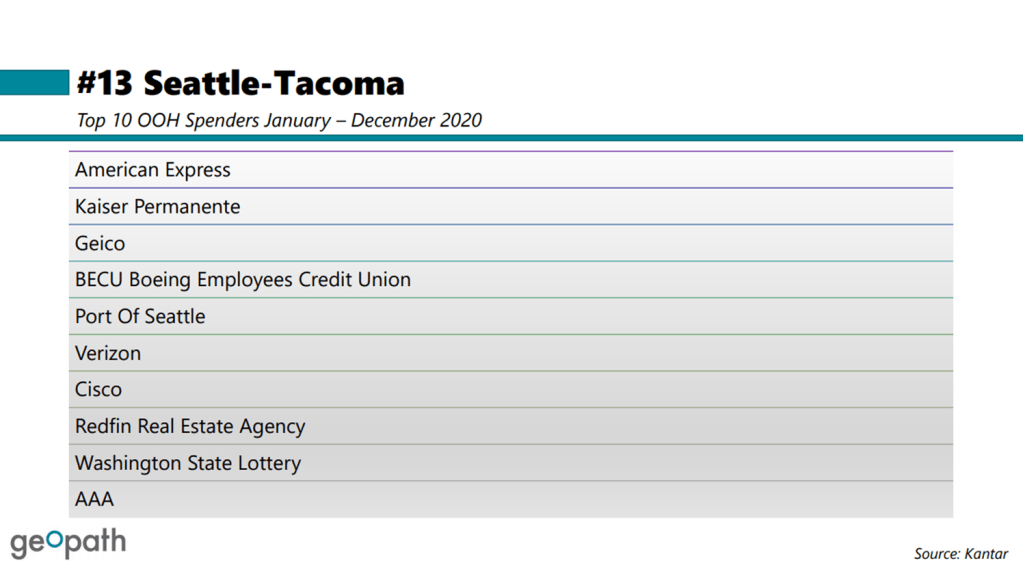 To start, it appears that the financial and insurance industries was consistent in its spending for 2020, with American Express holding the top spot. By looking at older spending reports available in the GeekOUT library, it appears that American Express was the top OOH spender in 2 of the 4 quarters of 2020, when Kaiser Permanente jumped to the top position on the list for last two quarters of the year. Outside of Kaiser Permanente, the insurance industry held two other spots as well, with Geico and AAA appearing in the third and tenth highest OOH spender positions. As mentioned in other write-ups, Geico is a heavy OOH spender, and also appeared in the top ten for 71 other markets in 2020!

OOH appears to be a great medium for both of these industries within the Seattle-Tacoma DMA as well. According to Geopath Insights, the 7,500+ pieces of inventory we measure in the Seattle-Tacoma DMA generates over 159 million target weekly impressions for “households that currently have a credit card,” and 47 million weekly target impressions for those that “have shopped for insurance online in the last 12 months!” 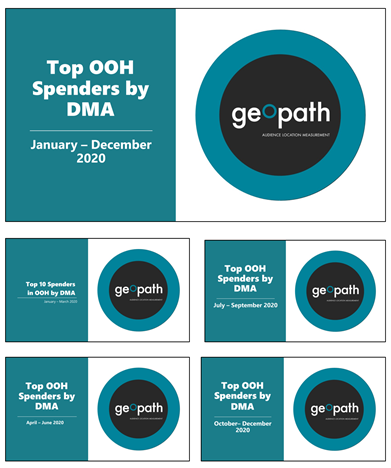 “An ad you can’t miss, for a cancer you do” —World Ovarian Cancer Day on Saturday, May 8