We hope everyone is staying safe, healthy, and is enjoying a great start to 2021.

For today’s Friday Fast Fact, we will be returning to our series analyzing the top OOH spenders in DMAs across the country, looking at who is spending in each market and any changes between the second and third quarter. As a reminder, all spending and research reports are available to our members via the geekOUT Library.

For today’s analysis, let’s head to the Southwest, and look at the thirty-ninth largest DMA in the country; Las Vegas. We will look at how spending changed in Q3, compared to the second quarter of 2020. With more than 8,400 OOH assets audited by Geopath in this market, it will be interesting to see which advertisers are taking advantage of the 1.5 billion impressions generated from this inventory every week!

With that said, let’s take a look at who was spending during Q2!  See below for the top ten spenders in the DMA for the months of April through June. 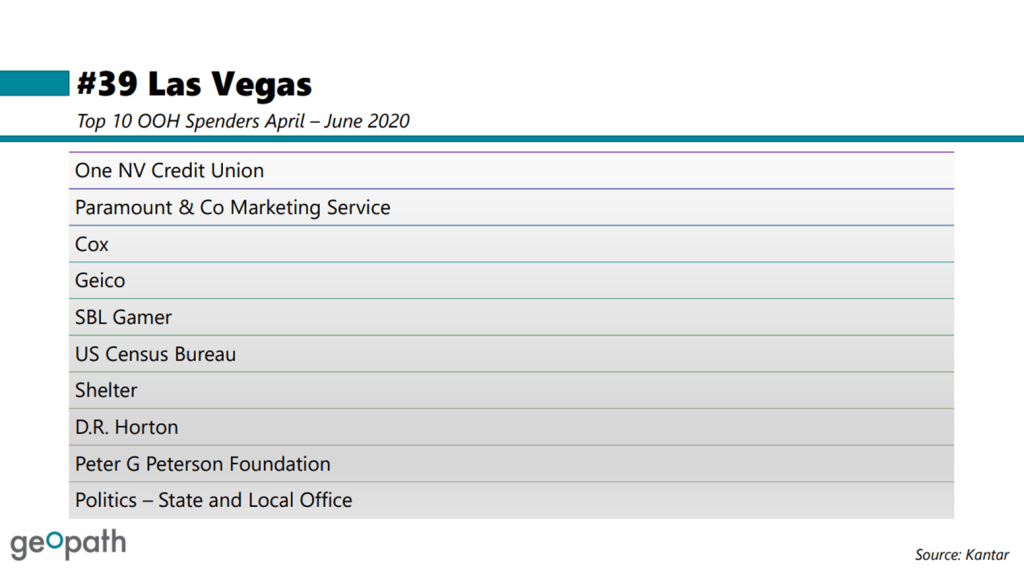 In Q2, brands spending within the Las Vegas DMA were predominantly from the financial, media, government, and insurance sectors. These included, but were not limited to, organizations such as the One NV Credit Union, Paramount & Co Marketing Service, US Census Bureau, and Geico.

However, third quarter spending reports from Kantar indicate shifts in not only the advertisers, but also the sectors represented during this period. During this quarter, data shows some additions to the top ten OOH spender list, as well as a number of changes in the ordering. See below for the top OOH spenders from July to the end of September. 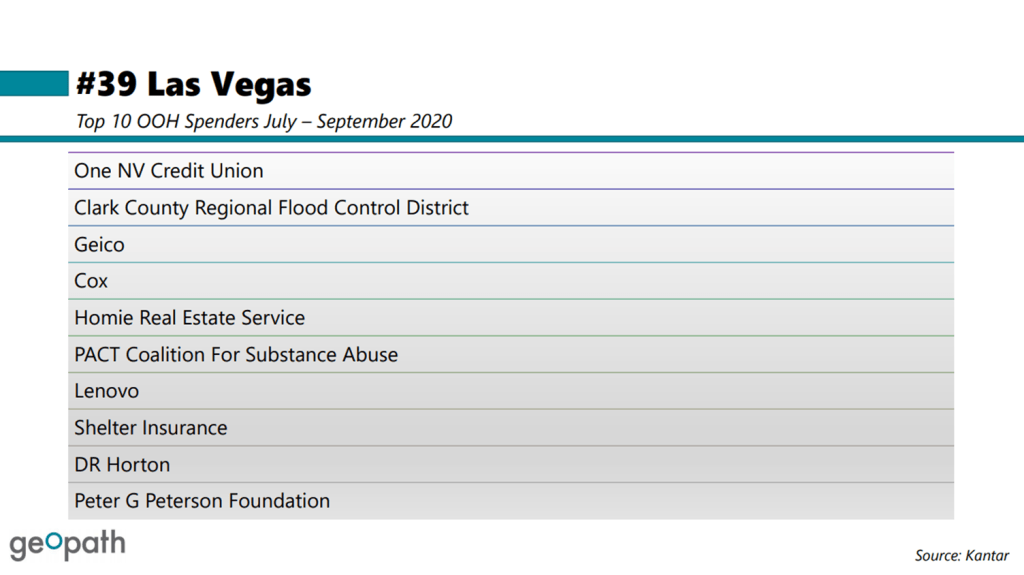 In terms of additions, four companies spent enough in OOH during Q3 to now hold a place on the list for the quarter. These included, Clark County Regional Flood Control District, Homie Real Estate Service, PACT Coalition for Substance Abuse, and Lenovo, which now hold the second, fifth, sixth, and seventh positions, respectively. These companies replaced organizations such as Paramount & CO Marketing Service, SBL Gamer, the US Census Bureau, and a political spending group for state and local office.

With that said, it’s interesting to note that the majority of the companies remained on the list from Q2, and did not shift in order too dramatically, which may indicate they are experiencing great results from OOH! While One NV Credit Union held steadfast in the top position, Geico moved up to the third spot, switching spots with Cox. In terms of the remaining brands, Shelter, DR Horton, and the Peter G Peterson Foundation all moved down one spot, but the order of these three companies remained the same.

OOH TODAY believes all voices, not just the loudest, must be heard 3196 posts 497 comments